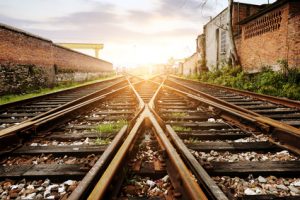 Close-up close-up shots of the tracks

I am here to speak in favor of the Southcoast Rail project, which on March 15, 2017, filed a Notice of Project Change, which proposes to proceed with building a phase one route utilizing the Middleboro line.  I want to thank Governor Baker, Chairman Straus and the local legislature delegation for their leadership and advocacy in bringing this project to fruition.  The region’s Mayors, Selectpersons, City Councilors, the Southcoast Rail Committee, the Southcoast Development Partnership, the Chambers of Commerce and countless citizens have voiced their support, and have been instrumental in moving this project forward.  After 30 years of promises, commitments and endless studies, New Bedford, Fall River, Taunton and Freetown will see passenger service within the next 3-5 years.  This is a GAME CHANGER for our region – the rail connection will provide economic opportunity, transportation equity, environmental relief, smart growth planning, personal productivity and unleash personal leisure time throughout our communities.

The following are substantive bullets which contrast the Stoughton versus Middleboro routes, and illustrate the wisdom and desirability of beginning the Southcoast Rail project using existing rail routes and the existing Middleboro line: